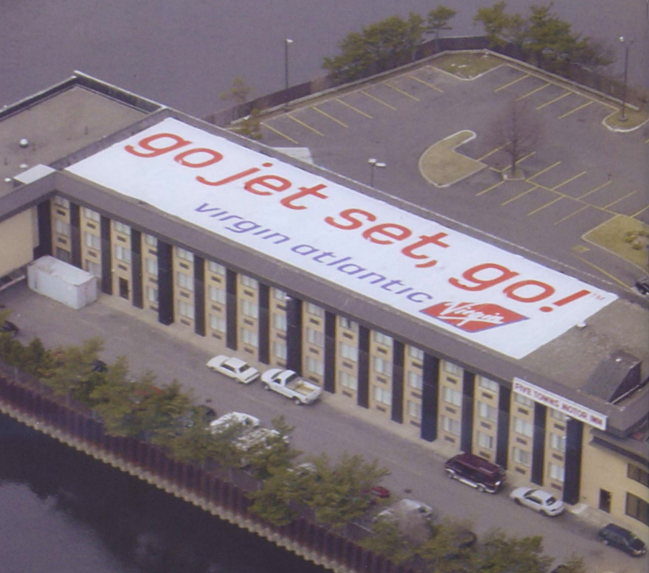 Airlines used to be prestige accounts. More than a few agencies made their mark with airline account work. CP+B was the longshot in winning this business,

Initially, the review was to be narrowed to two or three finalists, one of which would have been chosen in June. Mr. Riordan apparently felt Crispin Porter was the best fit and decided not to proceed further.

The masterful part of this campaign was selling the client to go risque which was still considered a big risk, however Richard Branson built the Virgin brand on risque- so what better client to approach with “Suite and Innocent” from “Mile High Productions.”

Warning- this video is far from Politically Correct, and probably wouldn’t fly in 2018.

Other media moves included rooftop ads near airports, and even a CP+B take on the normally staid inflight magazine

Leave it to Virgin Atlantic and Crispin Porter + Bogusky to come up with the perfect trendy name for what might be called a pre-flight mag: Jetrosexual. It’s not an in-flight mag, but rather “a small-format lifestyle book offered on a complimentary basis at airports throughout the country,” explains Crispin CD Andrew Keller. It has a $7.99 price on it, however. “Future issues are in development,” notes Keller. “Think of it as a free coffee table book that gives a glimpse into the lifestyle of a jetsetter.”

Source: Virgin Atlantic : A Magazine for Plane Folk | AdAge
The amount of hoopla around each successive campaign was like nothing the airline industry had every seen, or has seen since.